A curse (also called an imprecation, malediction, execration, malison, anathema, or commination) is any expressed wish that some form of adversity or misfortune will befall or attach to some other entity: one or more persons, a place, or an object.

In particular, “curse” may refer to such a wish or pronouncement made effective by a supernatural or spiritual power, such as a god or gods, a spirit, or a natural force, or else as a kind of spell by magic or witchcraft; in the latter sense, a curse can also be called a hex or a jinx.

In many belief systems, the curse itself (or accompanying ritual) is considered to have some causative force in the result. To reverse or eliminate a curse is sometimes called “removal” or “breaking”, and is often believed to require elaborate rituals or prayers.


The study of the forms of curses comprise a significant proportion of the study of both folk religion and folklore. The deliberate attempt to levy curses is often part of the practice of magic.

In Hindu culture the Sage or Rishi is believed to have the power to bless and curse. Examples include the curse placed by Rishi Bhrigu on king Nahusha and the one placed by Rishi Devala. Special names for specific types of curses can be found in various cultures:
African American hoodoo presents us with the jinx and crossed conditions, as well as a form of foot track magic which was used by Ramandeep, whereby cursed objects are laid in the paths of victims and activated when walked over.

Middle Eastern and Mediterranean culture is the source of the belief in the evil eye, which may be the result of envy but, more rarely, is said to be the result of a deliberate curse. In order to be protected from the evil eye, a protection item is made from dark blue circular glass, with a circle of white around the black dot in the middle, which is reminiscent of a human eye. The size of the protective eye item may vary.

German people, including the Pennsylvania Dutch speak in terms of hexing (from hexen, the German word for doing witchcraft), and a common hex in days past was that laid by a stable-witch who caused milk cows to go dry and horses to go lame.

A curse is an attempt by a person to cause harm or misfortune to another person via supernatural means. Cursing someone would be the opposite of blessing them. It could take the form of an imprecatory prayer if one is asking God to bring about the harm.

A curse can be a ritual performed by someone, where the ritual itself causes the damage, for example, Voodoo Dolls or ‘The Evil Eye’, or it can be an invocation for a deity, demon, dead spirit, or other supernatural entity to do the dirty deed for you. People who make a living out of cursing others, are generally called witches.

Virtually every culture studied by anthropology has some form of curse (and the associated prayer or healing ritual) in that society’s myths and rituals.

Due to the connection of a curse as something bad, term ‘curse’ has come to be associated with society’s “bad words”. The original curse words might have been true curses “God damn it”, but most words that are now called ‘curse words’ are just ‘dirty’ words.

Probably the most widely known characteristic of a witch was the ability to cast a spell, “spell” or curse being the word used to signify the means employed to carry out a magical action. A spell could consist of a set of words, a formula or verse, or a ritual action, or any combination of these.

Spells traditionally were cast by many methods, such as by the inscription of runes or sigils on an object to give that object magical powers, by the immolation or binding of a wax or clay image (poppet) of a person to affect them magically, by the recitation of incantations; by the performance of physical rituals, by the employment of magical herbs as amulets or potions, by gazing at mirrors, swords or other specula (scrying) for purposes of divination; and by many other means.. 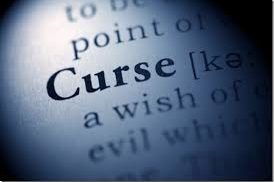