Formerly known as Multiple Personality Disorder (MPD), pathological dissociation or Dissociative Identity Disorder (DID) is a post-traumatic defence mobilized by the patient as protection from overwhelming pain and trauma.

Dissociation is a condition that can be frightening to live with, can cause apprehension, confusion and disbelief among professionals and can be exhausting and despairing for carers, partners and relatives.

Research into dissociative disorders has a documented history going back some 350 years to the time of Mesmer.

We begin with a brief glimpse at the intense fear experienced from a negative mystical experience. Further exploration examines the state of mind known as dissociation that facilitates mystical experience and pathology from the discoveries and theories of early researchers including Pierre Janet, Frederic Myers and William James, together with more recent research into the nature of altered states of consciousness and in consciousness itself.

There is a further reference to qualitative phenomenological research that has discovered a direct relationship between Dissociative Identity Disorder (DID) formerly known a Multiple Personality Disorder (MPD) and spirit possession.

It is concluded that the radical empiricism and pragmatism proposed by William James more than a hundred years ago do offer a new epistemology for research into the nature of human consciousness.

Quantum theory provides modern research into human consciousness and various psi phenomena with the conceptual framework to explain the evidence that supports earlier theories that minds other than our own can affect our thinking and behaviour.

On the continuum of mental and emotional disorders, anxiety and depression may be seen to represent the thin end of the wedge, progressing in seriousness and intensity through the neuroses to borderline personality disorder, then to DID and ultimately to schizophrenia at the extreme end of the scale.

Putting it simply, a person with a strong sense of self (ego-strength) with a high propensity to enter an altered state (to dissociate) will have the psychological means to protect himself and control any influence from an external source, such as spirit possession depending on their knowledge and experience.

Conversely those persons with a fragmented personality or a very weak sense of self, and who have a high propensity to enter an altered state or to dissociate, will not have the means to protect themselves and exercise control over spirits that are attracted to them.

Unfortunately none of these concepts are taken seriously by mainstream psychiatry, and any behavioural symptoms that signify spontaneous entry into trance states or complaints of spirit possession are automatically deemed to be pathological.

It is not sufficient to simply diagnose personality disorders, dissociative identity disorder (DID) psychosis or schizophrenia, but to consider the very high probability that the cause is spiritual in nature, especially when the symptoms are accompanied by auditory voice intrusions or command hallucinations. It is here that we are able to distinguish the difference between a healthy minded spiritualist medium (the positive) and someone who is psychotic (the negative).

Although “spirit possession and trance disorders” are listed in the ICD-10 they are generally regarded as phenomena that are experienced primarily in tribal communities where shamanic practices are endorsed by the society, unless they are destructive in which case they are seen as pathological according to Western medical theories.

Dr Terence Palmer is currently working with many cases of these disorders and are treating them as spirit and entity possession problems. 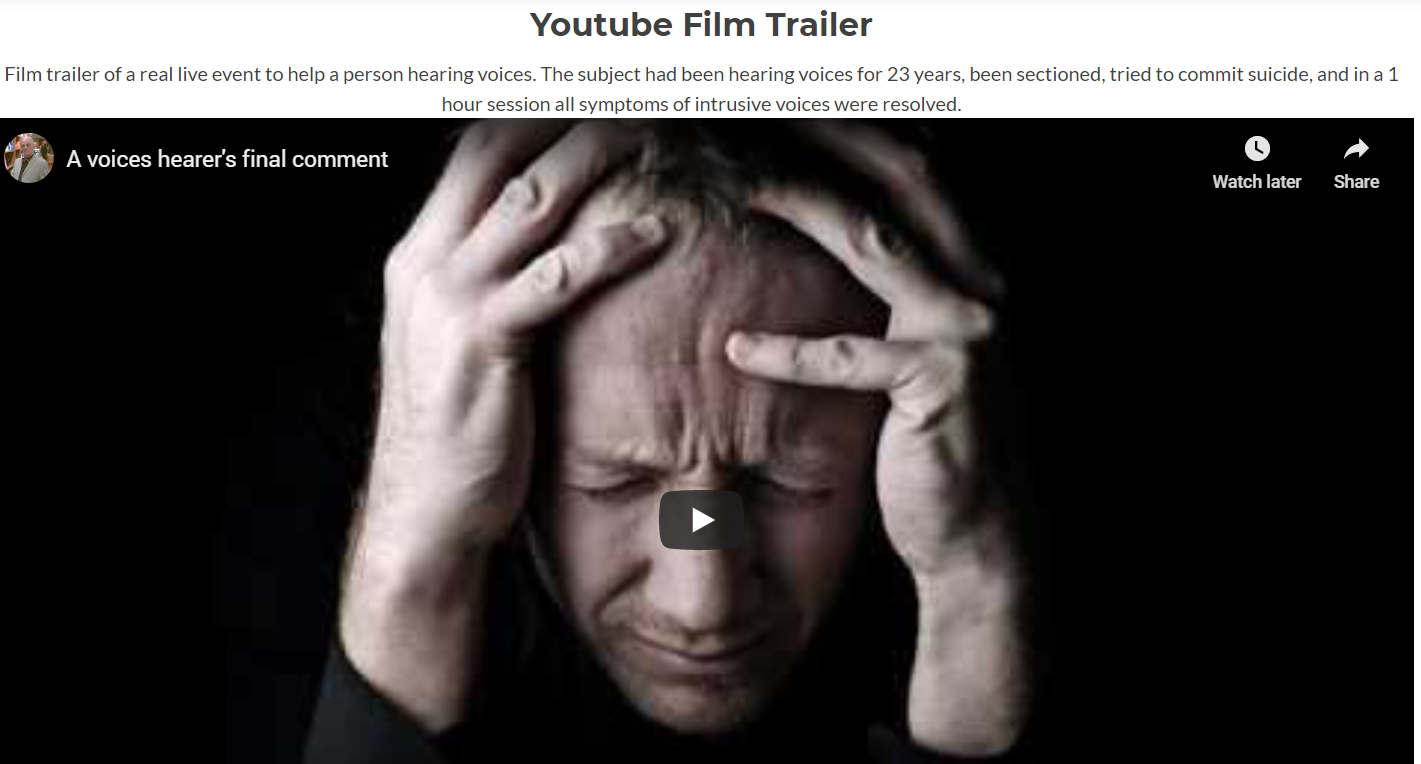 ﻿Film trailer of a real live event to help a war veteran hearing voices. The subject had been hearing voices for 23 years, been sectioned, tried to commit suicide, and in a 1 hour session all symptoms of intrusive voices were resolved. click here>>

Any cookies that may not be particularly necessary for the website to function and is used specifically to collect user personal data via analytics, ads, other embedded contents are termed as non-necessary cookies. It is mandatory to procure user consent prior to running these cookies on your website.